Among the many ill-defined terms that are tossed about in conversations regarding the efforts of the observational representationalist, “accuracy” may be one of the most problematic. Dozens of books, blogs and articles claim to reveal techniques that will improve your drawing or painting accuracy while offering little to no explanation of what drawing or painting accuracy actually means.

While the meaning of the term may change with context, accuracy can be defined as the condition or quality of being true, correct, or exact. It is the proximity of a measurement result to true value. This is not the same thing as precision, which describes the repeatability, or reproducibility of a particular measurement. Understand that a measurement system can be accurate but not precise, precise but not accurate, neither, or both. In general, a measurement system is considered valid if it is both reasonably accurate and precise.

Based on these definitions it would seem that our ability to be accurate in a drawing or painting endeavor would be determined by our ability to garner the true measure of something. However, as many representational artists would be quick to point out, this is only half of the story.  “Accuracy” for the representational artist is not only found in the gathering of information (e.g. measurement) but also in the registration and organization of the marks that are intended to “represent” the gathered information.

Let’s start this examination of accuracy by exploring a few variables inherent to the information gathering aspect of the representational drawing and painting endeavor.

The first variable to consider is probably the most obvious: vision. Visual perception is the ability to interpret the surrounding environment by processing information that is contained in visible light. However, the conflated images generated by a biological vision system do not accurately portray the physical world. This is something that needs to be understood at the onset of any discussion involving visual perception and accuracy. The chasm between the physical and the psychophysical is significant and as such we need to acknowledge that what we “see” is a construct of evolved biology—not an accurate measurement of an external reality. The mechanics of the visual system should not be confused with devices that can garner reasonably accurate measurements of the physical world (e.g. calipers, light meter, spectrophotometer, etc.) Rather, the visual system interprets stimuli based on past experiences and stored information in an effort to yield successful behavior. It is not the external reality alone that weaves the image we “see”–rather it is the biology of the viewer.

Second, we need to understand which locations along the path from the external world to the biological percept can yield useful measurements for our purposes.  For the observational representationalist these locations would include the distal stimulus (external object) and the proximal stimulus (retina). A distal stimulus is the energy (light) emitted by or reflected from some object while a proximal stimulus is the energy that is falling on an actual receptor surface (like the photoreceptors found within the retina). I should also take a moment to define the term “percept” as it will be used quite often throughout this paper. The percept is the mental representation that is developed as a consequence of the processes of perception. For example, when we “see” an apple, it is because light reflected from the apple (the distal stimulus) created a retinal image (the proximal stimulus) that was interpreted as an apple by our visual system (the resultant percept).

Third, we should define what the goal of the observational representationalist is in this context. I should clarify that while I am using the term “observational representationalist” to describe a specific effort here, the term does describe a broad continuum of realist efforts that may not be accurately described in this paper. For the purposes of exploring our focus, I am using “observational representationalist” as one who is NOT trying to create an accurate representation of the physical world, as from a strictly visual standpoint, that is inherently unknowable. Rather, I am describing an attempt to organize materials in a specific manner so as to emulate or recreate a percept as “accurately” to the original as possible. While the clarification of this variable may kick our intuitive physics into gear indicating exactly how this should be done–some further investigation may show this to be a bit more complex than you might think.

In order to keep a walk-through of the factors mentioned thus far somewhat simple (distal stimulus, proximal stimulus and percept), I will limit this exploration’s representational attributes to measurements of actual and perceived length (like height and/or width.)

So is it possible to garner useful length measurements from a survey of distal stimuli or it’s actual physical counterpart for an accurate recreation of a percept? This answer depends on the type of distal stimuli that is available to us and the manner in which we intend to apply that information. If we are looking to a distal target or physical object that consists of only two dimensions (like height and width without the influence of depth) for veridical representation, then a survey of a distal stimulus or physical object is just fine. This type of useful stimulus measurement can be seen in our own Language of Drawing and Language of Painting shape replication exercises. 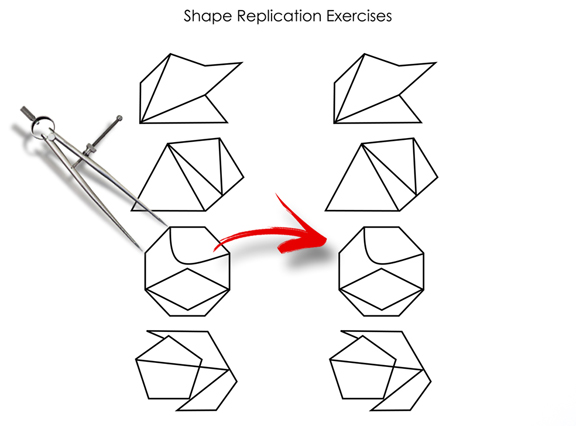 However, once we introduce the dimension of depth, direct measurement from a distal stimuli or physical object becomes less useful in the development of an accurate percept recreation. For example, consider this image of railroad tracks. 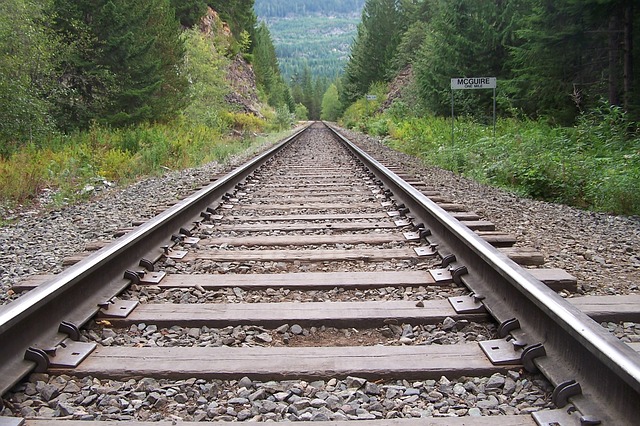 Imagine that you are standing in a place so that you have the opportunity to experience this representation as an actual scene. If you measured each crosstie, you would find that each tie measured about 8 feet wide. However, if you were trying to reproduce the percept via a representational painting or drawing, as represented by the image, the 8 foot measurement would not offer very much in the way of useful information. The above percept surrogate reveals crossties that seem to recede via incremental size diminishment and increasing horizon proximity. This size diminishment and horizon proximity is not a physical property of the ties themselves, but rather a consequence of how we perceive depth. Light from more distant objects will generate a smaller pattern of light on the retina, therefore distant objects will appear relatively smaller in our resulting percept. Additionally, objects higher in the visual field, but below the horizon are generally perceived as more distant while objects above the horizon are further away when they are lower in the visual field. Put another way, the closer an object is to the horizon, the further away it tends to appear.

So can a survey of proximal stimuli provide more useful length measurement information when a percept is influenced by depth cues? Indeed, and here’s how: Proximal stimulus (retina stimulus) measurement is often performed by artists with a small object held at arm’s length (often done with a pencil or brush). While maintaining a stationary position, an object is held at arm’s length with the elbow locked and shoulders straight. With one eye closed, the object is visually aligned with an object’s visible attribute that is to be measured (length or width). What is actually being measured here is not an attribute of the object, but the amount of visual angle that the object is occupying on the retina. 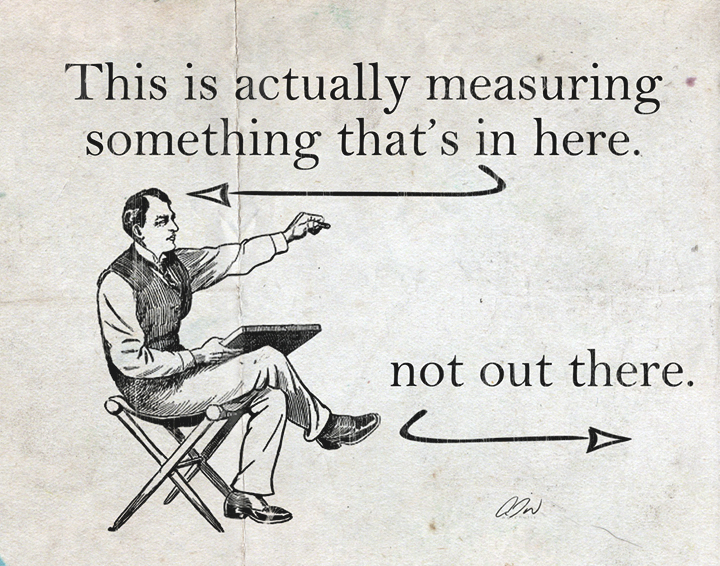 Even though we are indeed attempting to generate an accurate recreation of a percept, attempting to draw or paint veridically from a percept without measurement will often lead to significant inaccuracies. Let me say that again—painting accurately, strictly from a percept without policing from proximal/distal stimulus measurement, will most often not result in an accurate recreation of that percept. Let me explain–if I observe object (A), my brain will generate a reflexive response percept (A1). Therefore if I paint true to percept (A1), a subsequent viewing may elicit percept (A2) (or (A1(artist)+1(viewer)) as their reflexive response to my simulacrum is also not veridical. While this is not “bad” in itself—the more distant (A1) is from (A), the less realistic the resulting effort will appear. 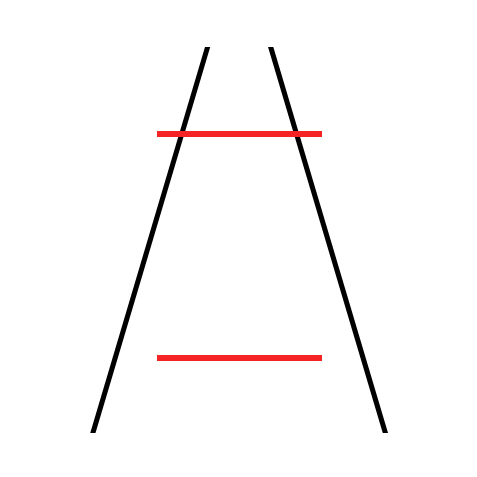 Take for example, this variation on the classic Ponzo illusion. Many would perceive higher red line as being longer than the lower red line (A1). If an artist were to record this perceived difference in red line length, a subsequent viewing of the effort may result in a percept with the above red line as even longer still (A2). A simple distal or proximal stimulus measurement would inform the artist that indeed both red lines are equal in length. Recording them as such, with the surrounding converging lines, will result in a viewer experiencing an accurate recreation of the artist’s original percept.

If your goal is an effective, accurate recreation of a percept, then this IS accuracy. It is NOT found in any one measurement that is effective in ALL cases, nor is it an attempt at veridical recording from the percept without adequate policing from physical measurement. It is NOT a veridical reconstruction of an original percept, but rather an application of the most effective measurements for a given scenario combined with relevant perceptual considerations that will lead a viewer to ARRIVE at the intended percept. While this strategy often leads to a far more “realistic” depiction of an object or scene, it may be considered “less accurate” from the artist’s perspective at the time of creation.

There is still much more to consider on this topic including other attributes of perception (shape, value, and color) as well as material considerations. I look forward to shedding much more light on these additional variables in the coming months.