Once again, it seems that an image that challenges our notions of visual perception is making the rounds on some social networks.  This time it is an image from Dr. Akiyoshi Kitaoka, a Professor of Psychology at Ritsumeikan University in Japan, who specializes in creating some highly effective demonstrations that allow us to see ourselves “see.”

This time it is a photograph of strawberries that appear to be veiled behind a digital curtain of cyan:

What may come as a surprise to you is that there is indeed no “red” within this image.

So why do we perceive red within this picture? Generally speaking—color constancy.

Popularized on social media via the 2015 viral blue dress photograph, color constancy can be defined as the perception of seemingly invariant properties of a surface’s spectral reflectance despite changes in illumination and viewing conditions.  For example, roses look red, violets look blue, and these appearances do not seem to change color with changes in illumination.

One of the contributing mechanisms to color constancy is what is known as chromatic adaptation. Chromatic adaptation influences the perception of a particular color within the context of its surroundings. In Wyszecki & Stiles’ COLOR SCIENCE: Concepts and Methods, Quantitative Data and Formulae, chromatic adaptation is defined as a change in the visual response to a color stimulus that is caused by (1) previous exposure to a conditioning stimulus (such as a luminous colored light or intensely colored surface) or (2) simultaneous presentation of the color stimulus against a surround or background of a different color.

Such mechanisms of perceptual adaptation are often associated with or explained by low-level visual processes (e.g., adaptation and opponency processes near the level of the receptor.) However, it is important to acknowledge that visual perception (or our perception of color) does not occur at the level of the photoreceptor any more than our perception of “touch” occurs at the level of the mechanoreceptor. To this point, one of the questions that popped up on social media in connection to the sharing of this demonstration was “Is that partly to do with people knowing that strawberries are very red?”

The responses seemed to downplay such higher-level processing contributions while steering attention back to low-level, data-driven mechanisms.

But are such responses correct in downplaying these contributions?

In an article regarding Dr. Kitaoka’s impressive new demonstration, neuroscientist Bevil Conway (National Eye Institute) suggested (after explaining the familiar components of color constancy of course) that there is more at work. “Conway said this illusion is also helped out by the fact that we recognize the objects as strawberries, which we very strongly associate with the color red, so our brain is already wired to be looking for those pigments.” – Kaleigh Rogers, Motherboard

It is true that modern research has shown that color constancy is not a simple mechanism to understand.  For example, while substantial chromatic adaptation takes place in the retina, additional contributory processes have been shown to take place as far as V4 and into the temporal lobe (inferior temporal cortex.) FMRI experiments in humans have shown that instantaneous color constancy involves strong activation in both the fusiform color area and V1, along with significant activity in V2 and V3 (Barbur & Spang, 2008).  The importance of V4 for color constancy was tested in lesion studies by Wild et al. (1985) and Walsh, Carden, Butler, and Kulikowski (1993).

Now, I should make it clear that activity that far along the ventral stream, (into the inferior temporal cortex), is indeed in or near the vicinity of object-recognition territory.  But let’s put that aside and consider a more significant aspect of this issue that may better address the above question—the inverse problem. (For those not familiar with the concept, the inverse problem of vision is the idea that information at the level of the retina (proximal stimulus) is ultimately an ambiguous conflation of distal stimulus variables (illumination, reflectance, absorption, and transmission).)

The idea that the visual system is somehow able to separate wavelength information from surface reflectance can indeed be viewed as another consideration of the inverse problem.  Therefore it should stand to reason that, given the inability of the visual system to have direct access to the properties of the world, the visual system links the frequency of occurrence of biologically determined stimuli to useful perceptual and behavioral responses without the need for recovering real-world properties. Fortunately, there exists a great deal of evidence for this interpretation of biological vision.

For example, if we were to look at another one of Dr. Kitaoka’s fascinating demonstrations we can see that that the left eye of each figure appears to hold color while the right appears achromatic (without color).  Such demonstrations are common examples of color constancy, as well as chromatic adaptation which again, are often explained by low-level operations of adaptation and opponency.  But could there be more at work here? 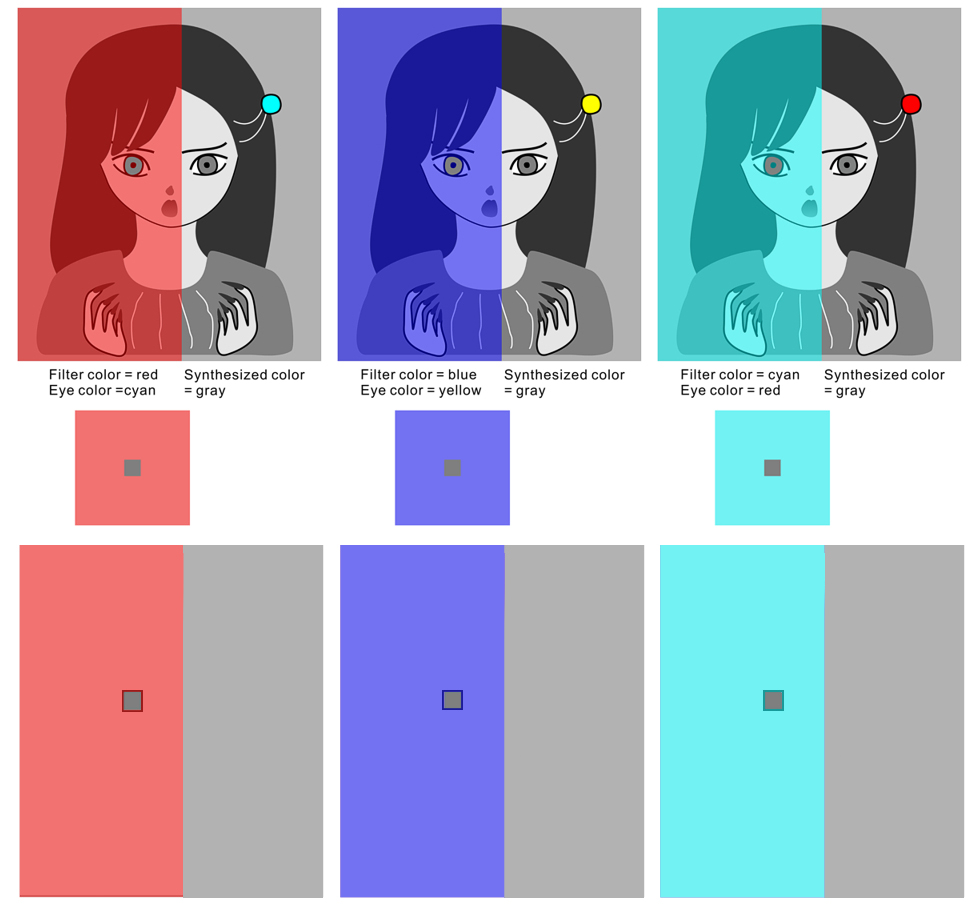 One issue worth consideration here is apparent disparities in “effect magnitude” between the less complex graphics of color swatches below the figures and the figures themselves.  Do the colors perceived in the small, central gray squares appear identical in chroma when compared to the perceived colors observed in the eyes of the figures?  How about in the lower section where the comparison is made even closer by keeping the context somewhat ambiguous but moving the spatial relationships closer to the original figure configurations?

Now, does this mean that we are linking the available stimulus to familiar female figures that indeed have cyan, yellow or red eyes? LOL—of course not. What I am stating is that we (both individuals and the species) have found behavioral success in the past by perceiving an achromatic stimulus in such contexts as a particular color.  Furthermore, there may also be a push from our past association of “color” with our concept of the eye.

Here are our strawberries again with an abstracted version to see if a less familiar context holds the same magnitude:

While some hypotheses may hold more predictive power than others here, we can indeed be certain that current research reveals that there is much more in play in addition to the significant contributions from low-level adaptation and opponency.

Hope this offers some food for thought….

4 Comments → A Rose by any other Color…