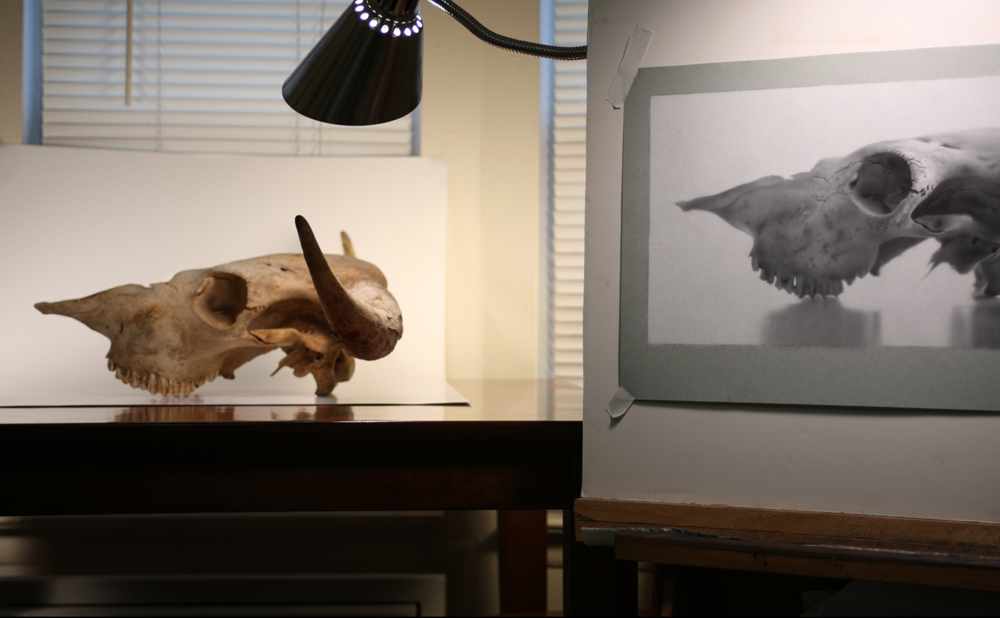 The edge can be a powerful part of the artist’s arsenal. It performs many important tasks, ranging from establishing simple boundaries to charting the eye’s course through a sea of visual information. The manner in which we develop edges can pull the viewer toward our intended areas of focus, immerse our subjects into the rich environments that surround them, and give rise to spectacular illusions of dimension. Edges can be simply defined as boundaries that separate one shape, value, color, or form from another. They are usually established with simple lines during the initial phases of a drawing, then as the drawing develops with value, edges take on a much more influential role. The following demonstration documents how artist Timothy W. Jahn handles edges throughout a drawing and how they impact the overall image.

GETTING STARTED: For this study, Jahn elected to tackle the challenging subject of a cow skull. This iconic Southwestern image offers a multitude of shapes, forms, and textures for an artist to work with, making it a fantastic subject from which to study the impact of edgework. In an effort to make this study applicable to many approaches of both drawing and painting, Jahn chose to work in black and white on toned paper. He drew with compressed charcoal pencils and white pastel on sky-blue Canson Mi-Teintes charcoal paper. This paper has both rough and smooth sides for use with various materials, and its color is quite harmonious with the blue-based grays produced by many charcoal-and-white-pastel combinations.

Step 1:  The artist began with an initial line drawing, or cartoon, paying close attention to major shapes and overall contours. These first lines were applied with the softest charcoal available using the lightest pressure that the artist could attain. Applying too much pressure early with hard or sharp materials can cause indentations or incisions in the paper that may detract from the finish. A light initial application of line work also allows additional freedom for varying edges later on. Jahn chose to offset the skull to the side within his composition, a potential problem, as this can lead the viewer right out of the picture. His challenge was to keep the viewer gravitating to his chosen focal point. 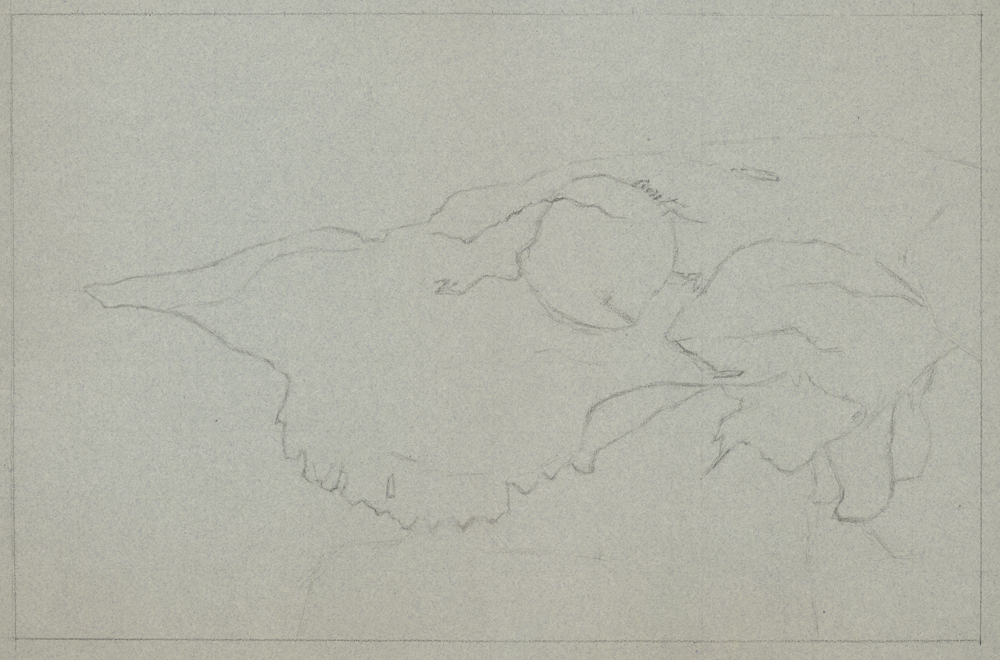 Step 2: The second phase of the drawing began with the addition of “anchor” values—lights and darks that are easy to identify and establish, and they also serve as good points of reference for subsequent values. A drawing’s lightest lights and darkest darks are often used as common anchor values. As these first values began to describe the basic forms within the skull, Jahn carefully considered the edges of these inner forms. It is important to remember that edgework is not just something to pay attention to at the outermost contour of a form; edges are found throughout a form and relay a great deal about it. For example, Jahn varied the edges of the initial value within the eye socket from the beginning of the drawing process. It is sharper is some areas than in others due to the changing relationship between the socket and the surrounding bone. As you can see in the detail image, abrupt changes in form often produce sharp edges (such as Edge A), whereas subtler changes result in softer ones (such as Edge B). 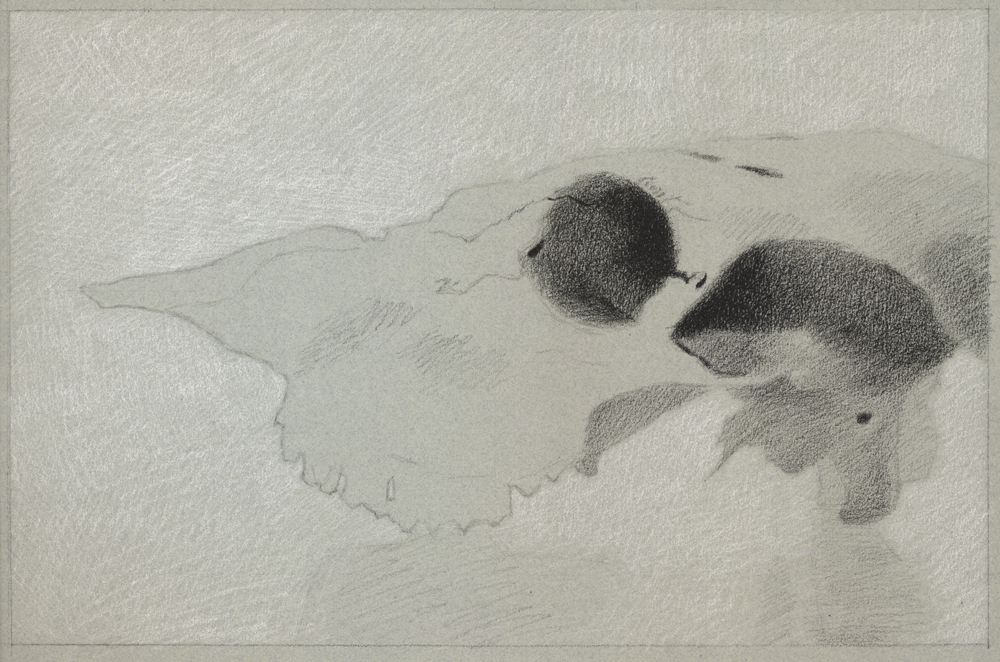 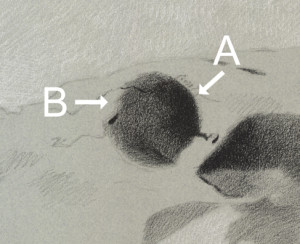 Keep in mind, especially at this early phase, that it is almost always easier to sharpen a soft edge than it is to soften a sharp one. If you are unsure about sharpening a specific edge early on, leave it soft until more information is available in your developing drawing to guide your decision. Just like the lightly applied line work in the first step will provide flexibility in later stages, softer edges in earlier stages may provide similar flexibility.

Step 3:  With anchor values in place, Jahn started to add and develop the values that populate the rest of the drawing. He began to make the edges of the forms that describe the focal area (the eye socket) sharper than edges in the surrounding areas. Jahn also made a conscious effort to exaggerate the softness of the areas of the skull that he wished to recede further into the background. This made the focal point even sharper in comparison and pushed it farther out, increasing the overall dimensionality of the subject. 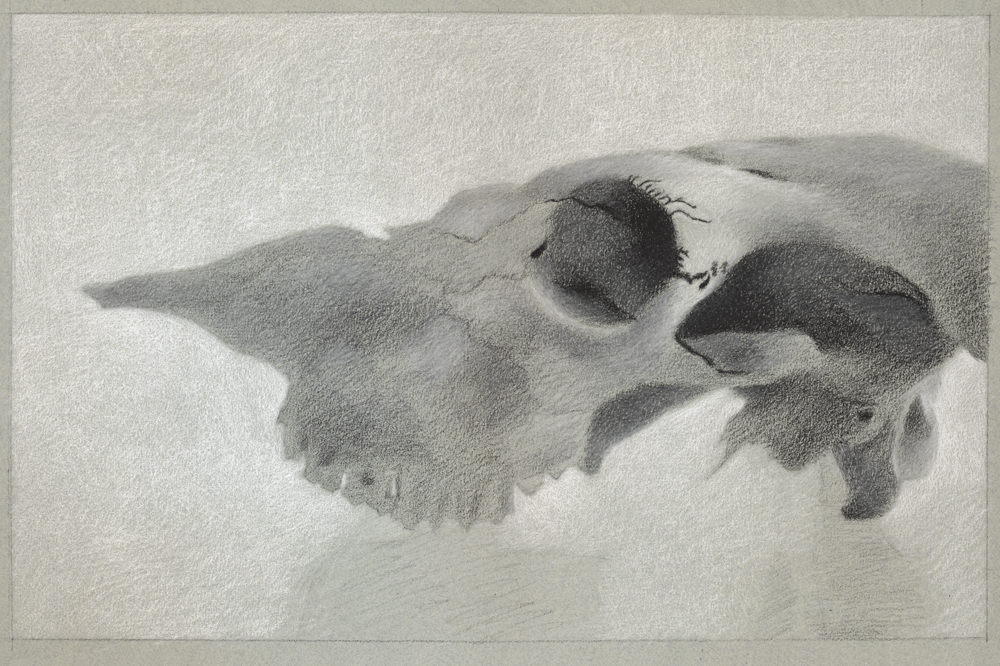 Step 4: Form and dimension continued to develop as Jahn built up values and refined edges. Promoting the soft contour of the overall skull gave the focal area yet another push forward. The gravity of a focal point becomes more powerful as soft edges carry the viewer’s the eye to sharp ones. This gives artists an incredible ability to use edges to guide the viewer’s eye to key places within an image. 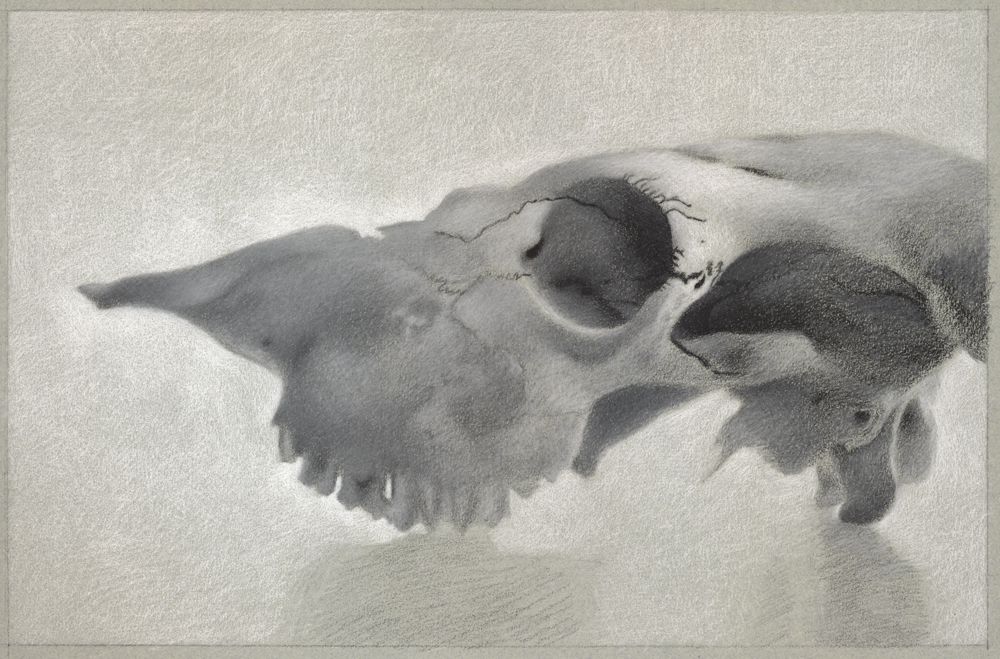 Step 5: Jahn developed values even further to describe more texture and form. A series of varied strokes yielded a rendered finish, and the artist refined the skull’s outermost edge. Because the early stages of the piece were drawn with a light touch and without heavy lines and values, Jahn still had the freedom in these late stages to enhance or vary the overall contour. His edges married the subject to its environment and promoted depth. The contrast between the sharp edges within the focal area and the soft edges of the surrounding areas reached its zenith. Jahn’s employment of sharp edges, increased contrast, and subtle detail in the focal point will successfully keep viewers gravitating to it. 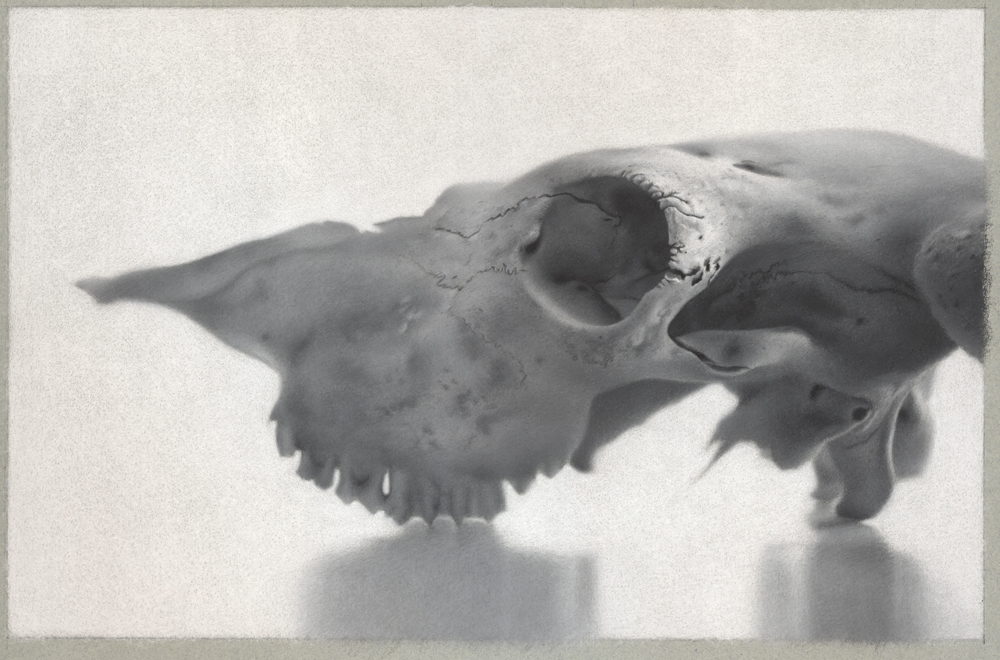 For a recap, let’s take a look at the gradual increase in edge sharpness nearing the focal point. In the detail image, areas 1, 2, and 3 move from softer to sharper focus, carrying the viewer right to area 3—the drawing’s focal point. 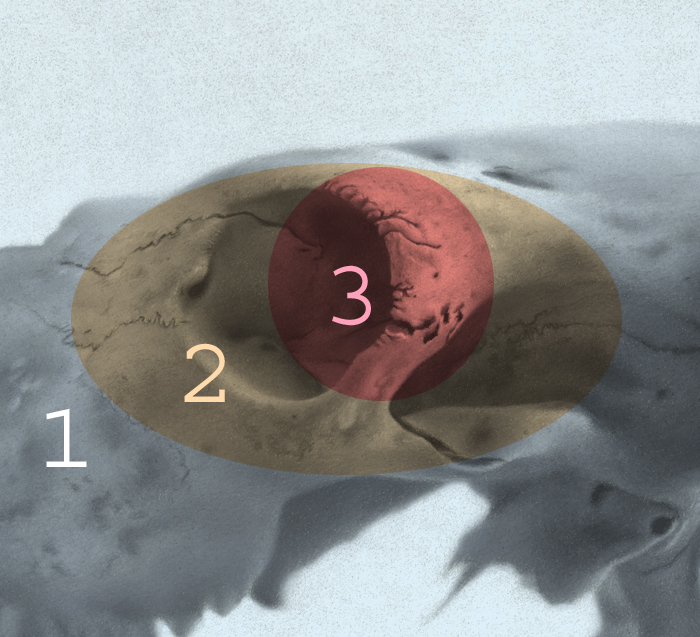 Remember that the edge has a powerful influence over the way subjects are communicated. Careful planning at the onset of any project will help you to determine how to make every edge help advance the goals of your drawing. Ask yourself, What forms will I be describing? Where would I like the viewer to focus? Which areas of my subject should recede, and which should protrude? Questions such as these give you a great starting point to effectively plan a successful work of art, and we wish you success employing edgework in all your artistic endeavors.

We wish you every success!

1 Comment → Focusing on the EDGE by Timothy W. Jahn and Anthony Waichulis