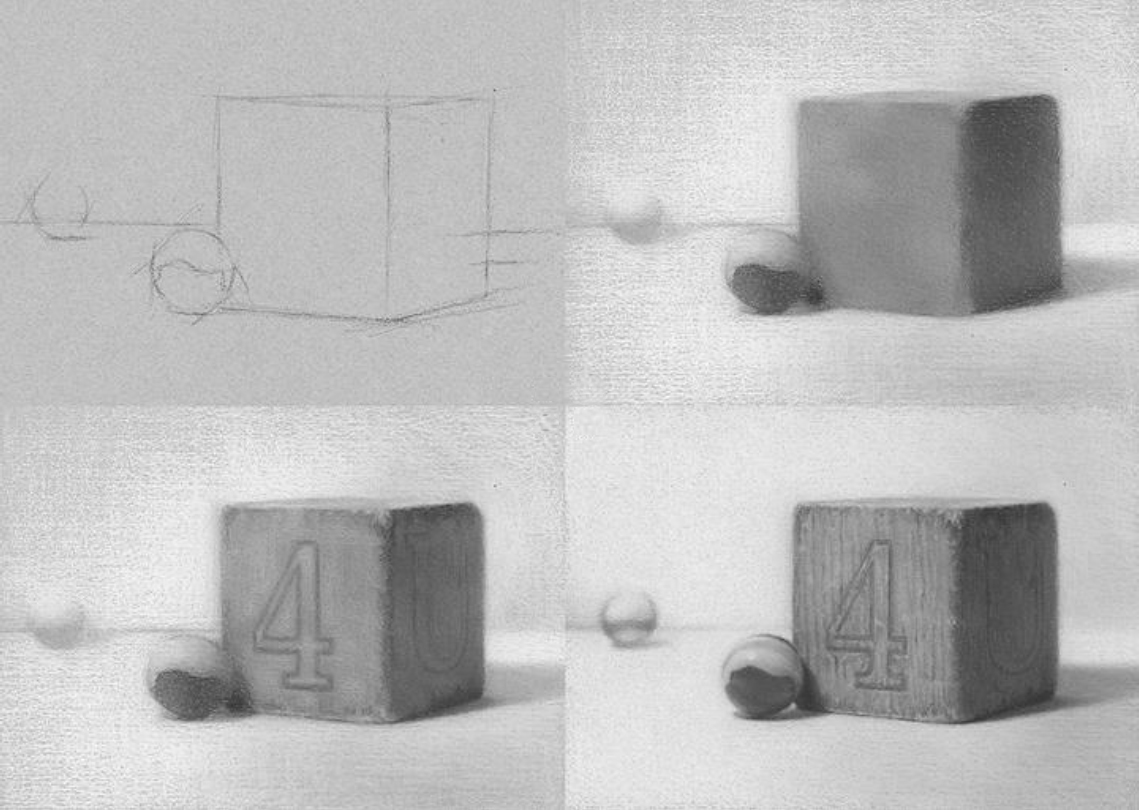 Published in The Artist’s Magazine, 2008

From the coarse, weaving grains of weathered wood to nature’s footprints on the glassy sheen of polished stone, a few simple surface details can really bring a subject to life. Believable surface textures can add layers of interest, reveal character, preserve history and add great sense of illusion. As with most seemingly ‘detailed’ endeavors, the secret to success is simplicity. Here are a few simple approaches to some of the most common textures:

IMPORTANT TIP:
Keep in mind that all the charcoal layering should be done with subsequent layers in mind. Applying early values with an overly heavy hand may damage the tooth of the paper, hampering your ability to add subsequent layers. Care should be taken to keep most edges soft, as hard lines can become difficult to soften later.

Wood can be conveyed through a wide variety of visual clues. Specific grains and knots top off an array of features that communicate a wooden surface to a viewer. Here we chose the subject of a child’s wood block to illustrate this: 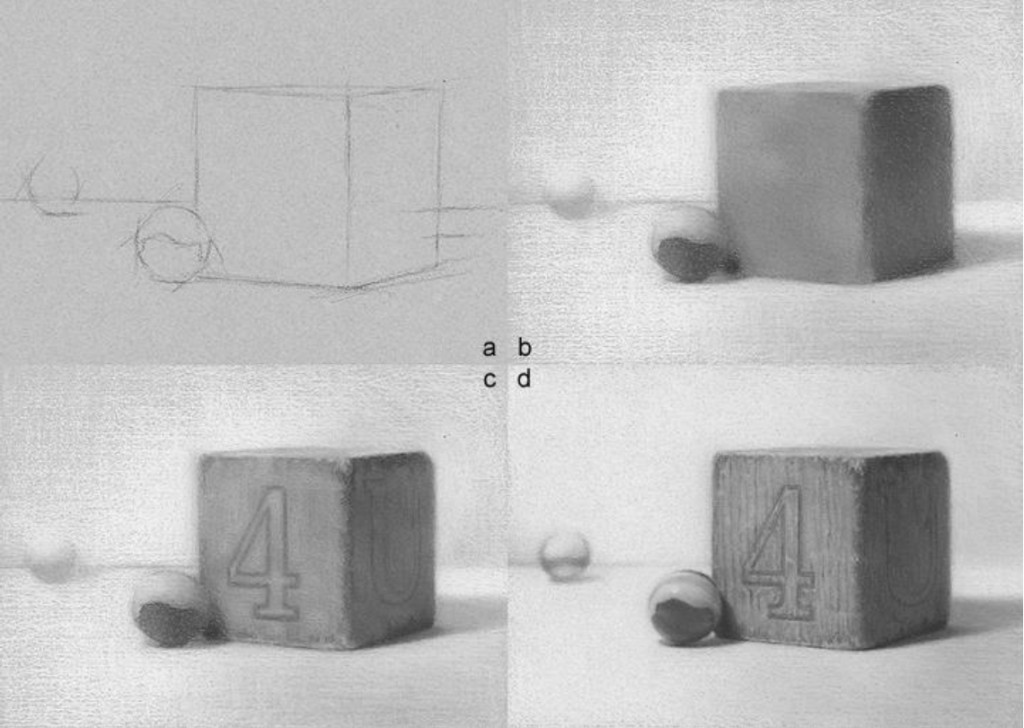 We begin each drawing with a simple charcoal outline (A). Next, a value pattern is established to reveal the basic forms (B). As the lights and darks continue to develop by layering (C), the most prominent surface elements are added (number and letter engraved in the woodblock and dark wood grain patches on the worn edges of the block). The values are refined a bit more while continuing to add the remaining grains. Small cracks and scratches are also drawn in during this stage to really complete the illusion of the wooden surface (D). The marbles that have been included in the composition also assist in conveying the wood texture via juxtaposition—the glass marble’s sharp highlights and sheen surface help to both contrast and emphasize the dull finish of the wooden block. Often times, surrounding textures can be used to highlight adjacent ones.

A vast variety of surface characteristics can be used to describe the countless texture configurations of stone. For this particular series, we have chosen to tackle polished river stone. These stones contain beautiful swirling patterns that appear locked under a reflective polished shell. While seemingly complex in pattern, these subjects can be “tamed” with a simple approach. 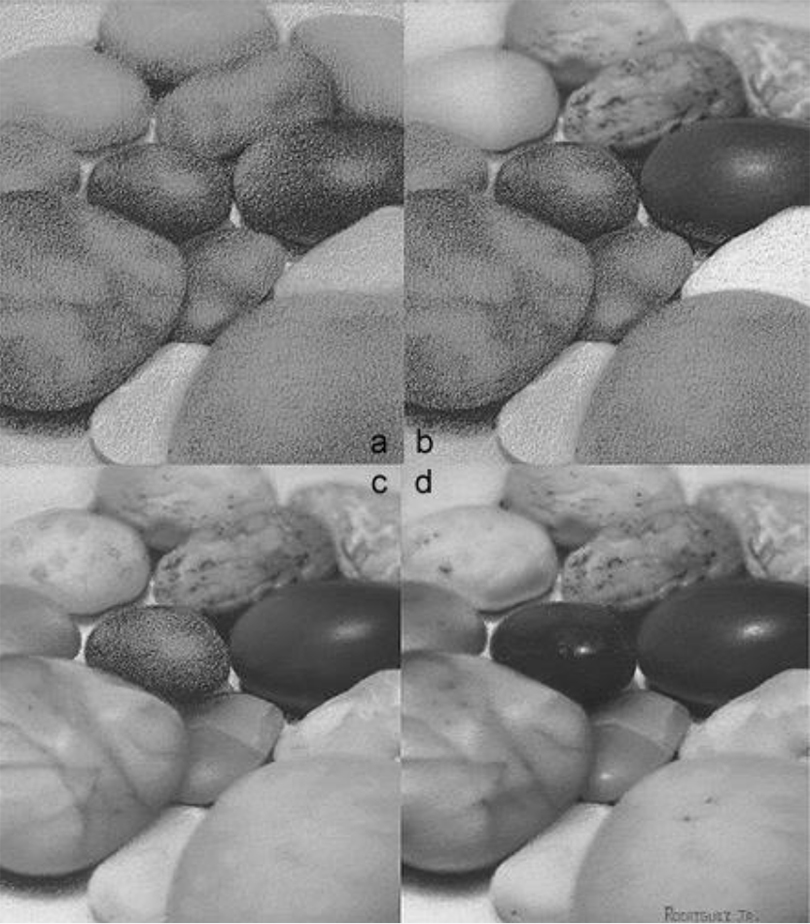 Beginning with the same simple outline, early values and gradations are lightly applied (A). These early values will act as a map to guide the addition of the patterns to follow. Stronger values are continually layered up and the initial prominent texture patterns are begun (B). Don’t forget that these patterns must follow the forms of the rocks! Surface details in the light should appear lighter and those in shadow should appear darker.

When all value patterns are built up (C-D), the final strong isolated highlights which illustrate the reflective surface of the stones are added (D). Once again, to complement the texture of the central subjects, slightly contrasting stones (a bit duller) were included in the composition.

Decorative print, patterns, and designs can really add a great deal of interest to an otherwise simple cloth. From patchwork to embroidery, the same general approach applies. Here, an extremely simple line pattern adds a new level of interest to this folded subject. 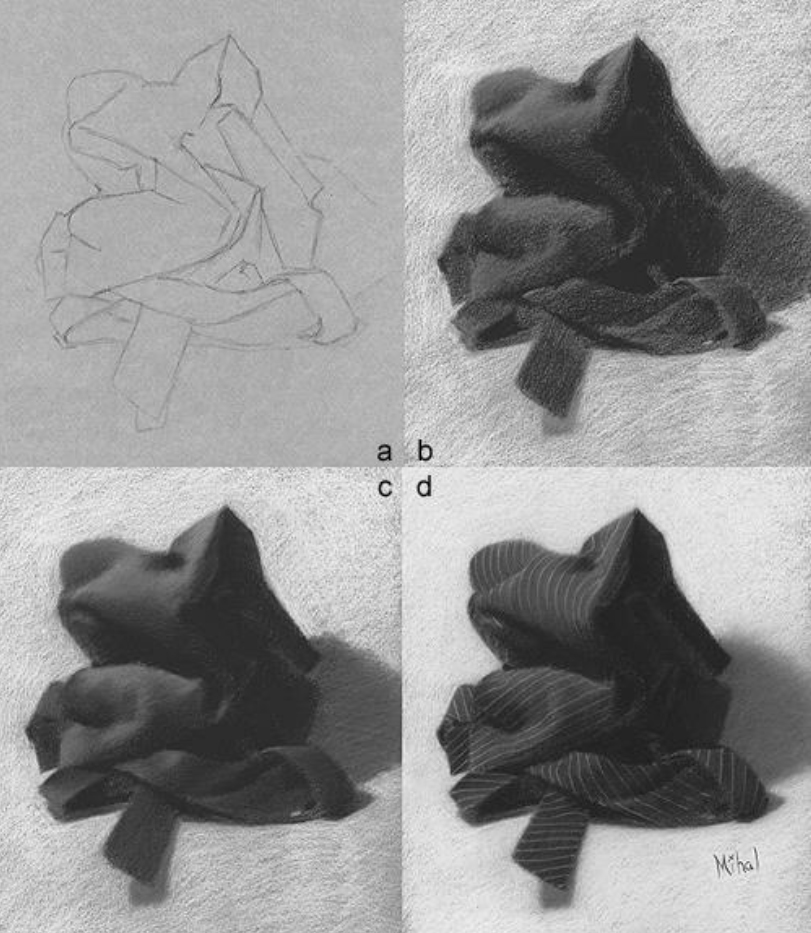 As with the previous drawings, employing a simple outline (A) and value structure (B) lays the groundwork. A series of refinements and additional variations (C) in the base values results in an already believable collection of folds. The pattern here is not very prominent. In fact–it is quite subtle–allowing us to reserve it for the endgame of the drawing. (Note that if there were larger, more prominent designs on the drapery, it would have begun in the earlier stages, as seen in the polished stone example.) When the line pattern is finally drawn (D), we make sure that the line work follows the form. Notice that the pattern shifts in direction to match the twists and turns of the folds, and like in the earlier examples, the lines change in value to follow the underlying form. The result is a strong subject with an added level of interest.

The shapes, forms, and textures of seashells hold unparalleled natural beauty. They have been popular artist subjects for centuries. 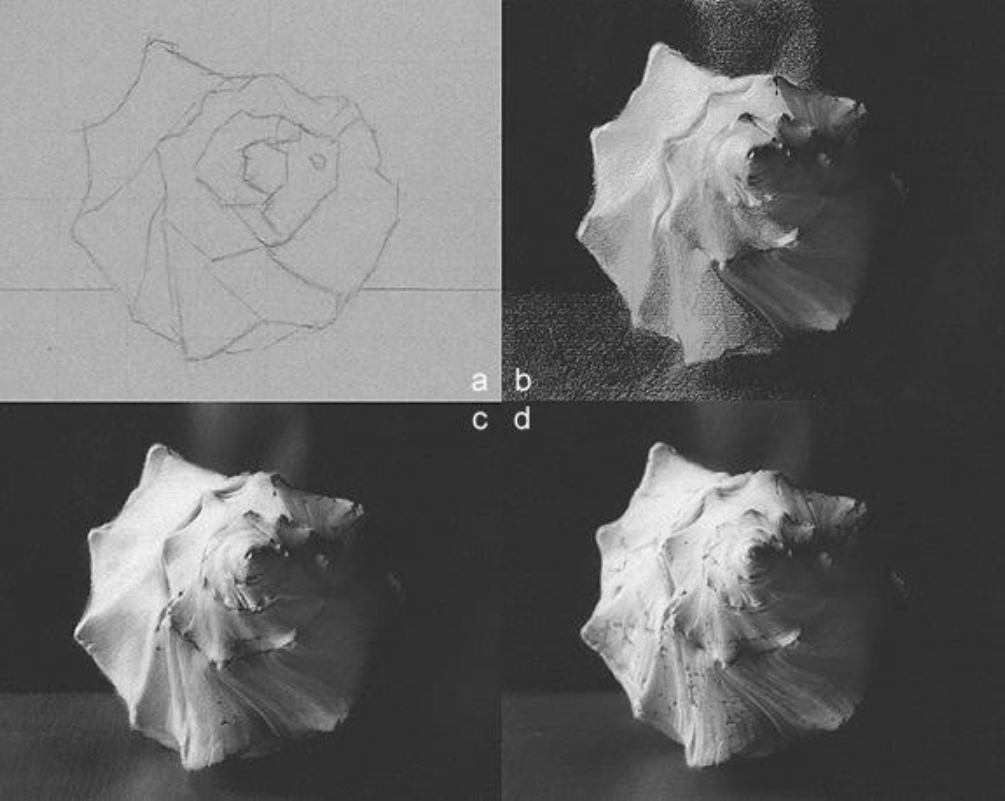 Once again, this piece is broken down into the same progression of steps. Notice some of the more prominent surface variations were added as early as the block-in layer (B). Some of the major cracks and chips in the surface were added during the next layer (C). Final details really complete the subject. A successful balance of so many tiny surface elements on top of a large strong form can really grab and hold a viewer’s interest.

Surface details can be a powerful tool to assist in communicating your subject effectively. They can add new levels of depth and interest to any endeavor.

We wish you every success!