While stumbling around some of my favorite social media pages this past week, I came across a short video of a contemporary artist suggesting that the artists that employ certain imaging technologies in their process should not refer to themselves as classical or traditional artists.

While I do understand the desire for an artist to want to distinguish his or her efforts from the competition–I’m not sure that all distinctions are valid. Not once in any art history class do I ever remember learning that the use of imaging technology was a disqualifier for a “classical” or “traditional” label; however, it is possible that I just missed it.  As some of you may remember—art history class can be a little dry.

So let’s explore this idea by taking a look at what The Encyclopedia Britannica has to say about the idea of “classical” art:

“In the visual arts, besides the general qualities associated with the aesthetic attitude of Classicism, classicizing artists tend to prefer somewhat more specific qualities; these include line over colour, straight lines over curves, frontality and closed compositions over diagonal compositions into deep space, and the general over the particular.

…The Classical tradition was not extinguished during the Middle Ages, but because of the resolute efforts of 15th- and 16th-century Italians to absorb the Classicism of antiquity, the Italian Renaissance was the first period of thoroughgoing Classicism after antiquity. The 15th-century architect Leon Battista Alberti equated Classicism and beauty and defined beauty in architecture as “the harmony and concord of all the parts achieved by following well-founded rules… In painting, artists were to choose subjects that glorified man, use figures suited to the actions being represented, and imitate the appearance of actions in the natural world. In the visual arts the Classicism of the Renaissance is epitomized in Michelangelo’s David (1501–04; Accademia, Florence), in Raphael’s portrait of Baldassare Castiglione (1516; Louvre, Paris), and in Donato Bramante’s Palazzo Caprini (c. 1510; Rome; destroyed).

The examples of antiquity and of the Renaissance in Rome provided the standard of Classicism for the next two centuries in Italy, while in 17th-century France those examples, along with Alberti’s theories, guided the principal French artists to a purified Classicism. …In 18th-century England, Classicism in architecture—based on the works and treatise of the Italian architect Andrea Palladio, themselves based on Roman antiquity and on Renaissance Rome—provided standards of Classicism that pervaded English and American architecture until the beginning of the 19th century.The academic leanings of English painters such as Sir Joshua Reynolds provided lessons in Renaissance Classicism that dominated a similar span of English and American painting.”

While the above text does describe a number of attributes for “classical” work—it features nothing about an aversion to innovation or the technologies of the day. However it is interesting that the above description highlights Sir Joshua Reynolds as having provided lessons in Renaissance Classicism that “dominated a similar span of English and American painting.” We will come back to this in a little bit…

So what about “traditional”?

Merriam Webster defines “traditional” as something “based on customs usually handed down from a previous generation.” So perhaps what the artist in the aforementioned video was claiming was the idea that imaging technologies have not been around that long—or perhaps that imaging technologies have not been incorporated into the practice of painting and drawing for very long?

But is that true?

It turns out that devices like the camera obscura, lucidia and ottica (as well as other imaging technologies) have been a part of “traditional” drawing and painting for quite some time. While the earliest extant writings regarding the Camera Obscura reach as far back as 470 BC to the Chinese philosopher Mo-Ti, it may be more to-the-point to jump ahead to several documented cases of historically significant artists or art texts referencing the technologies in question.

Starting in the 15th century (again, recall the above-mentioned resolute efforts of 15th- and 16th-century Italians to absorb the “Classicism” of antiquity), Leonardo Da Vinci gave two clear descriptions of the camera obscura in his notebooks (1490). Furthermore, Leonardo actually published the first clear description of the camera obscura in Codex Atlanticus in 1502. Not long after, Italian scholar and polymath Giovanni Battista Della Porta, in his 1558 book Magiae Naturalis, recommended the use of this device as an aid for drawing for artists while Venetian author Daniele Barboro, in his perspective manual for architects and artists, described how to draw from an image projected by a ‘camera obscura’ onto a paper screen.

In looking to the 17th century, we find Johann Christoph Sturm, Johann Zahn and Georg Friderich Brander developing the “box-type” Camera Obscurae which led to the models that were popular with eighteenth century artists. Among these artists were Gaspar van Wittel, Antonio Canal, called Canaletto and Joshua Reynolds who particularly appreciated the use of William Storer’s Royal Delineator. 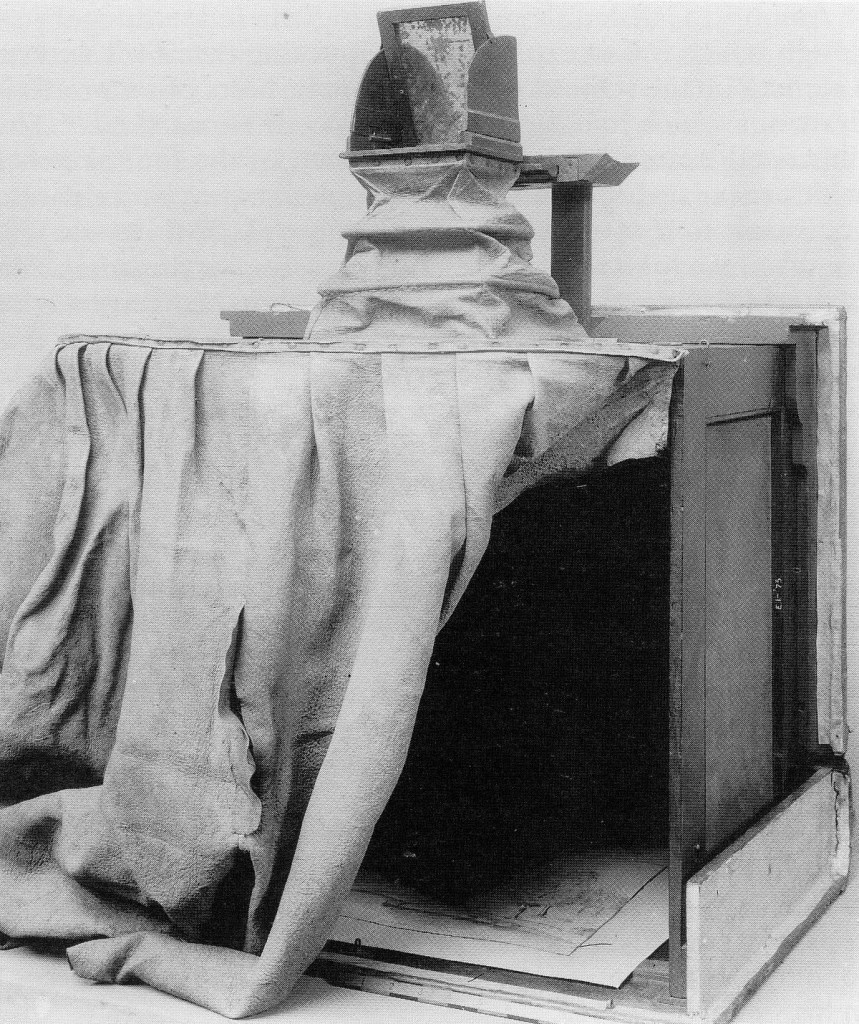 The same artist that “provided lessons in Renaissance Classicism that dominated a similar span of English and American painting” used a Royal Delineator.

18th-century English landscape painter and diarist John Farington also described Gainsborough’s use of an interesting device called a “show box”: “Gainsborough’s box was a camera constructed of movable glass panes, on which he painted landscapes and other subjects. They were lighted by candles at the back, and when seen through a magnifying lens ” the effect produced was truly captivating–the moonlight pieces especially exhibiting the most perfect resemblance to nature.”   However, this device seems to have been more for entertainment purposes than that of a drawing tool for his painting/drawing efforts.

William Cheselden’s lavishly illustrated 1733 Osteographia, or the “Anatomy of Bones”, was a landmark in the history of anatomical illustration. Cheselden used a camera obscura for the production of the text’s plates and was actually reported to have circumvented the problem of the device’s upside down inversion by hanging his subject specimens upside down in front of the camera.

William Storer’s Royal Delineator was definitely the most complex and the most sophisticated camera obscura around 1778. Of this device Horace Walpole wrote “… it is invented within these eighteen months by William Storer, a Norfolk man, one of the modestest and humblest of beings. Sir Joshua Reynolds and West has gone mad with it, and it will be their own faults if they do not excel Rubens in light and shade…“

Now while there exists a good amount of circumstantial evidence that imaging devices were indeed employed by artists  Caravaggio, Velázquez, and Vermeer—I am not going to address those cases here as adequate documentation indeed does not exist.

But what about the use of actual photography?

Photography has also been a useful tool in the arsenal of many historically significant artists throughout the decades. Artists such as Picasso, Degas, Mucha, Kahlo, Cezanne, Gauguin, Lautrec (to name a few) have used reference photography to create some of the most celebrated works available today. A simple web search will reveal many of the reference photographs that the above mentioned artists used for some of their most popular works.

As you can see from the few select examples shown here, imaging technologies have been a part of the visual artist’s arsenal for many years (all of the above claims can be easily verified with minimal research-which I encourage you to do).  It would seem that there is a “tradition” of artists using the technology of their day to create new and innovative work. Additionally, it seems that artists that were dedicated to “classical” traditions were also not averse to employing the devices they saw fit to achieve their results.

The fact that some artists do not use available technologies does not make them classical, nor does it make their work traditional. They put paint on a canvas or panel as do those that do choose to employ available technology. To attempt to make a qualitative distinction otherwise seems to demonstrate that the artist is attempting to compensate for a relative shortcoming by explanation rather than innovation.

Happy painting—however you choose to do it.